Crash & Sunburn features plenty of interesting locales to ride through. One set of tracks take place on a cruise ship (a really, really long cruise ship…), and individual tracks take place at waterfalls, mines, an active logging site (of questionable legality), a coastal playground that looks like a course in Wipeout (TV show), and even a landfill. Most of the tracks are nice to look at - the landfill looks like a dump. It’s a nice improvement over the Sixty Six expansion - its tracks tended to look similar to each other.

The tracks are fun to ride through. I completed every track, but I won’t complain about the lack of difficulty this time: the last set is fairly tough. Crash & Sunburn does not get as difficult as the base game, but it’s tougher as a whole than the Sixty Six expansion.

If you’re a Trials player who wants to get to the most difficult tracks quickly, I have good news for you: I had to beat a single level in each league to move on to the next. I’m not sure why this happened (you usually have to beat all three tracks in the Stadium Finals), and it may have something to do with my level (100+), but it was a cool thing that happened to me.

The expansion grants access to two new bikes. The Alpaca has two-wheel drive. It’s not just front-wheel drive as it has an hilariously weak rear wheel that is unusable by itself. The overall speed of the Alpaca seems to match that of the Helium (bicycle). The Turtle has a roll cage. You can use both on levels outside of the expansion - no need to worry about a Trials Evolution situation where they locked the bicycle to one of the expansions. I view these two bikes as fun bonus content for buying the expansion - they are fun for a track or two, but I do not want to regularly use either one.

The expansion comes with four skill games: Speed Demon, Pinball Wizard, In the Dark, and Rocket Man. The highlight of the set is In the Dark - the lights in the track slowly dim, and you have to touch glow-in-the-dark platforms to turn the lights on. The other three games are fun, but they seem very similar to skill games from previous entries in the Trials franchise.

A set of cosmetic items round out the contents of the expansion. I didn’t use any of them, but that’s because my Trials rider already looks perfect: 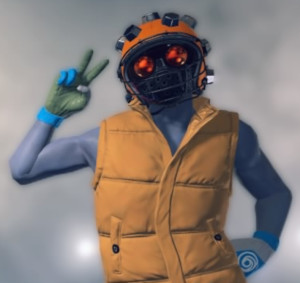 I think that the Crash & Sunburn expansion is worth the $11.99 asking price, but only for dedicated fans of the series - I got an appropriate amount of enjoyment out of it - but it is a fairly steep price for what amounts to a solid pack of tracks, a few skill games, some cosmetic items, and two bikes with gimmicks.

I recently discovered Funky Corner Radio, and it quickly became one of my favorite radio stations to listen to. Here are 50 reasons why you should listen to it:

Have a listen at Funky Corner Radio!

(You may not want to play Funky Corner Radio over speakers at your workplace. Some of the songs get freaky.)

If you dig my work, that’s excellent! There are a few ways to follow my activities out there.

Let’s say, for a moment, that you want to know when I publish an article. One way to stay up-to-date is to subscribe to one or more of my RSS feeds.

First, you need to get a Feed Reader.

On desktop, I like Feedbro. It’s a Firefox and Chrome browser extension that provides feed-reading capabilities.

For Android, I’ve used Just Rss for a bit and I like it.

On iPhone and iPad, Feeddler looks good, but I haven’t used it. I’m not sure if it supports importing feeds.

If you’re into using a website to read feeds, people seem to like Feedly as far as online services go.

The next step is to add my feeds to your reader. Many feed reading programs support an ‘Import from OPML’ option. Just download this OPML file and import it. You should be set and ready to see my latest posts no matter where I make them.

If you just want to follow a specific site, each of my blogs also has a link to its own feed.

Other websites have RSS Feeds too - maybe your favorite site offers it. Sites that offer RSS Feeds will often show this icon:

They may also have a link that says “Feed”.

If you’re interested in my open source contributions, head over to dustinleavins @ GitHub.

I’ll keep this article updated with where to find me online.