Did you know that Tony Hawk’s Pro Skater 2 (PC) was released in Korea? It’s a little bit different from the ‘normal’ PC release, so I’m going to cover differences that I have found.

The Korean version of THPS2 is the only THPS game that features members of Korean pop group Fin.K.L as selectable characters. All four members are present, and each has a unique portrait and bio. They (sorta) share two character models. 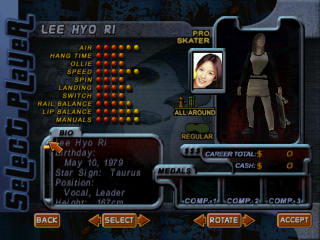 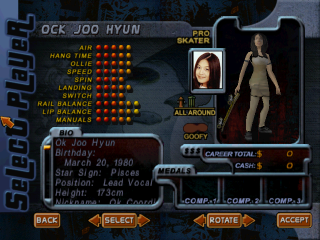 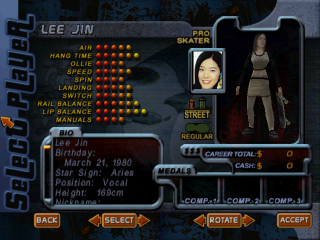 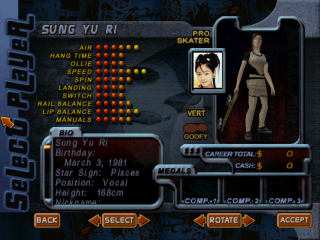 There are ‘A’ and ‘B’ styles for each skater. 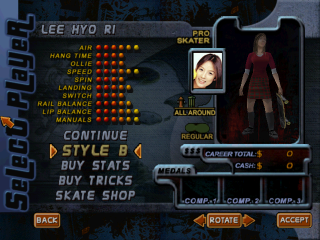 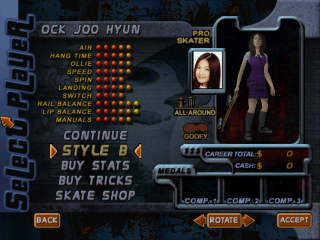 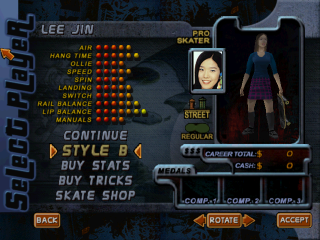 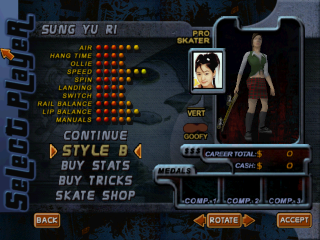 Each member of Fin.K.L shares an entire movelist with a skater already in the game.

(Wikipedia uses slightly different translations for these names, but I know absolutely nothing about Korean.)

Everyone uses the same board designs as the Create-a-Skater, and the only sponsor graphic for these four characters is the group’s logo.

THPS2 is best known for its soundtrack. The Korean version bolts additional tracks (all by Fin.K.L) to the ‘normal’ soundtrack:

(Album name is in parenthesis)

These songs are listed only in the manual (some listed in Korean). Wikipedia’s Fin.K.L article and GoKpop were used in compiling this tracklist.

I could not finish Career Mode with Lee Hyo Ri because the game crashes immediately when you beat the game. I’m running this game on Windows 7, but none of the other videos crash the game. I checked to see if the Korean version has any special video (like a Fin.K.L music video), but it does not.

Music & game credits are unchanged except for different audio being used. The additional songs are at the ‘start’ of the tracklist, which changes the credits music (but none of the videos).

Why do I have this game?

It was cheap, THPS2 was/is one of my favorite games, and the fact that a Korean pop group is in the game made it (sorta) weird and interesting to me.